How do you organize computer cords and cables?

I work in a tech-heavy industry. I'm a little bit of a computer geek. I have had up to four computer mice on my desk at once:

1. A left-handed mouse as I'm ambidextrous

2. A right-handed vertical mouse to prevent carpal tunnel in my dominant hand

3. A trackpad and stylus for photo editing

4. A standard mouse in the middle for the folks for are befuddled by the other three.

Add in all of the other devices I have plus network cables and I have no fewer than ten cords hanging out under my desk. It's a real mess. 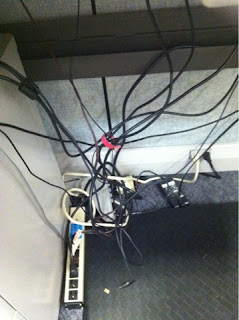 But there's hope! Here are a couple easy tricks that helped me clear up the mess of cords. 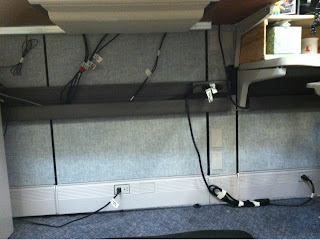 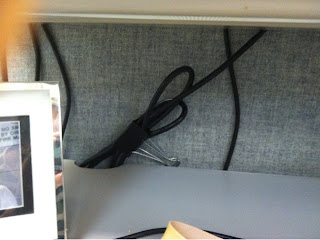 Bundle up the extra lengths of your cords. Extra length of cord takes up more space and has a habit of getting tangled up with other cords. I've used lots of things to bind up the extra length. In this picture I used a large binder clip to wrap up some extra cord. Good in a pinch, but given that it's metal and we're talking about electrical stuff here it's best to use something else. I like rubber bands and I've even used the occasional elastic hair tie. My favorite are velcro ties but those do need to be purchased. You can see one of them in the "before" picture. It's the little red band. ﻿


In the end I used masking tape.

The next step to keep your cords organized is to label them. This way you don't have to unplug a bunch of cords to figure out which one belongs with which device. You can use masking tape, paper and clear tape, electrical tape, or even those little plastic bread ties. Masking tape was, again, my weapon of choice! Better handwriting than mine also helps. 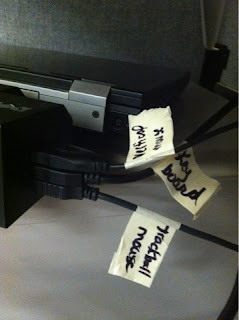 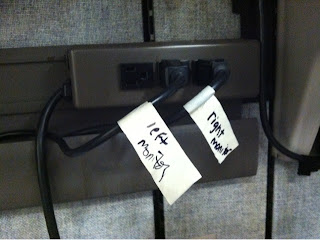 Beyond that, set up your cords so that the cables have to cross each other as little as possible. Sometimes this means getting an extra power strip. It may mean actually taping a cord to the wall or along the edge of the floor to keep it from getting tangled up with the other cords. Either way, spending a few minutes making these little changes was completely worth my time!

Email ThisBlogThis!Share to TwitterShare to FacebookShare to Pinterest
Labels: cords and cables, organization

If you try to advertise your online business by writing a comment on this blog, please don't bother because I will delete it.