He's back, and so is the budget

The Chief Engineer came back.

I won't go into personal details but the couples I know who separated and came back together are quite a bit stronger than they were before. Yes, it was very painful. But I knuckled up, took better care of myself than I have in ages during my nearly three months alone, and I think we came out better for it.

One improvement is that we will now and forevermore live with separate finances. Part of our problem came from the fact that I spend money like water and he holds on to it. That of course builds resentment. Having two incomes gave me a false sense of financial security. Now I live under my own income. I also bought a car. First car! I need a car now as he and I were co-dependent before and never did anything apart (no wonder we needed to separate!) We now both have activities at the same time in different cities.

After groceries and my car loan and my contribution to our mortgage I have $400/week left to spend on what's got to get bought. That should be plenty, I think. I hope. I'm not good with money so we'll have to see how it goes.

When we separated it was very quick and very dirty. He took one credit card and I took the other and the debt that came with it. Fortunately I managed to snag 0% interest on a new spare credit card. I got the spare card because when I went to rent a car back in May I found out that I didn't have the right brand of card (visa/mc/amex) and couldn't do the rental. I also feel that since the stripes on my cards die occasionally, it would be good to have a spare. Here's the debt.

I've added bars on the right to track my progress. I've spent the summer contributing to an emergency fund for myself but not chipping away at the debt. That is in my name and is my responsibility. Let's see how I do. Hopefully money will no longer divide us.

In the meantime, check out my "Organizing $$$" tab to follow my progress!
Posted by Unknown at 9:51 AM 8 comments:

Email ThisBlogThis!Share to TwitterShare to FacebookShare to Pinterest
Labels: budgeting

Organizing for house guests before and after

When the Chief Engineer moved out I decided that 1200 square feet and two bedrooms was too much space for just me, and honestly I wanted some company. I also wanted some incentive to keep the place clean and organized! I decided to put the spare space on Air BnB and within a week had two lovely guests. I specified women only. Both women were my age and very friendly and I was happy to have them over. The extra money didn't hurt on my new budget either!

Before the ladies came I needed to get things cleaned up. I'd really let go after the separation, as you can see!﻿ 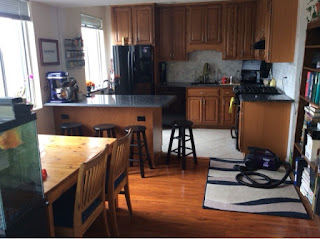 Except for the kitchen. That was okay. 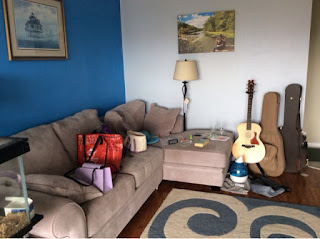 Problem: I come home, I'm tired, and everything lands on the couch 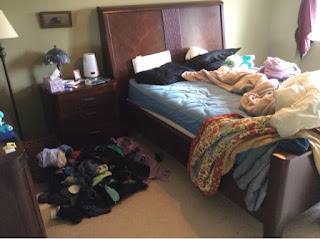 Or next to the bed!﻿

After ages of decluttering, my problem now is not that I don't have space for things, it's just that I don't put things away. After I tidyed up here's how it all looked. So much better, right?
﻿ 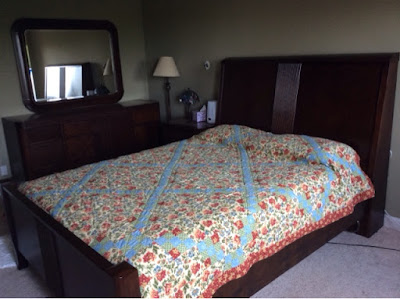 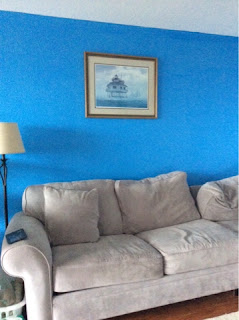 Does anyone have any suggestions for avoiding the mess in the first place? I'm so tired when I come home from work that I just drop it all and then don't seem to get around to tidying up until I have a reason, like house guests. I think it's good incentive for me to continue to do Air BnB.
Posted by Unknown at 5:43 PM 6 comments: