I've had mixed success unloading things on eBay. Yes, I've made money, but in the end it often goes like this:

1. post
2. repost
3. repost
4. sale!
5. locate packing materials. which really means, dumpster dive for old boxes
6. wrap
7. walk to post office
8. fork over almost as much money as I'm making to ship the darn thing
9. FINALLY get paid!  wait. I made $2 for all that work. ugh.

Our thrift shop is a very long drive away. Time to let people come to me. Hello, freecycle!

This week we got rid of three big things on freecycle: 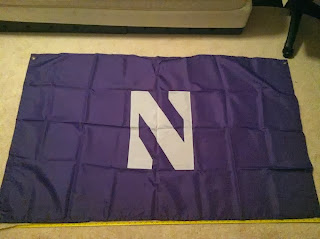 This college flag from the Chief Engineer's school days 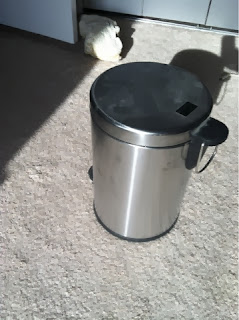 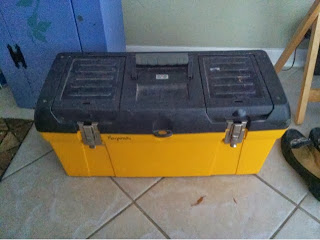 and this construction box.

Why do I have one of these? Because when I went to college my mother felt that I was very sick and needed a ton of medications to take with me. She filled it. Now I use a drawer for my meds and a medicine cabinet for my personal care items.

The flag was apparently worth it for the Chief engineer. The trashcan was picked up from my MIL's stash when she cleaned out a while back. I have to stop picking up free stuff! At least there was no money wasted.

And my mom bought the construction box. So three items gone, but at least no money wasted.

We live in a 1200-square-foot condo. We lived in 900 square feet when we got married. It was also a high rise with no patio. And yet somehow I managed to register for a lawn mower and a charcoal grill. I was drunk on the American dream.

Fortunately the lawn mower didn't show up but the grill did! My MIL was kind enough to keep it for a while but we took it back last month.  Since then I've had one of these things sitting in our soon-to-be Matrix movie-watching room: 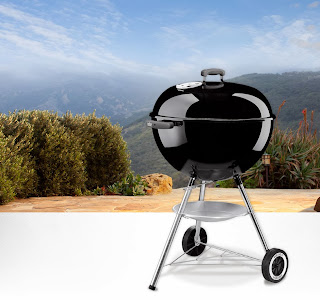 This grill can be yours for the low, low price of $79.99! Or almost $100 when you decide you need to also register for the charcoal starter chimney! Ugh. What was I thinking?!

I'd listed it on craigslist with no takers, not surprising given that it was 40 degrees this week. But Sunday we went out to lunch with my ex-boyfriend's college roomate and friends...though not the ex-boyfriend, haha. Two of the friends got married this summer and we've all attended each others' weddings. We were talking about awful/useless wedding gifts that we've received and the Chief Engineer brought up the silly charcoal grill that was taking up space in our back room. I was bemoaning the fact that no one was buying it when my friend chimed in, "Hey, I'll take it!"

He paid for our lunches and we drove him home to hand over the grill. I am so happy to see that thing gone from our back room!


Now I just have to figure out what to do with the cheeseboard that someone gave us as a wedding gift...to my dairy-allergic husband. Le sigh.

What were your silliest wedding gifts or registry items?

We could've registered for something sensible that we would use, but instead we wasted that one gift on a grill.

Items 192 and 193: a weber kettle grill and charcoal starter.
Value: $100
Total money wasted on stuff we shouldn't have bought/registered for:

It's been a while. I survived the DC furlough and three weeks off gave me an incredible amount of time to think. No, I'm not stopping the blog, but I do think I needed a break. It's amazing how much even things I do for fun become things that I keep telling myself I "should" do more often, and then they become burdensome. Posting was one of those things where I kept "should"-ing myself and I took a much-needed break.

I spent the time not doing nearly as much decluttering as I wanted to do. Which is fine. I did spend quite a bit of time on something called Amazon Mechanical Turk, which is a website run by Amazon.com where you can get paid a pittance to do small jobs, most of which are either transcription or psychology studies. It helped me contribute a bit financially and it gave me a chance to learn more about myself. Psychology studies are actually really cool! Yeah, I'm a geek.

I focused on taking studies about anxiety and eating disorders, since my eating disorder has gotten worse in the last couple months. Stress at work, medication changes, still not talking to my family, and it all adds up to .... a return to intensive outpatient treatment. I begin again in three nights a week of treatment on Wednesday this week.

On the plus side, I also spent a lot of time thinking about what makes me happy in life. One of those things is Spanish, so I decided to take two months next summer to study abroad and work at a medical library in Spain. I have the paid vacation time at work and it's considered a sabbatical, so it should be quite doable and very fulfilling. After that, we finally decided that it's time to settle down and have a baby.

Which brings us, oddly enough, back to decluttering! Our spare bedroom has never really been used for anything except storage. Over the furlough I decided that I wanted more out of the room before we turn it into a nursery. So for the next 2-3 years, or until the kid is old enough to realize what he/she is looking at, we're going to have a Matrix-themed room! We moved the TV into the back room and are trying to get more of the junk out of it.

This was the room before we started. 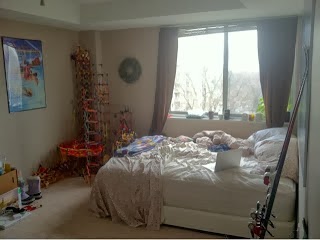 The plan for the room is as follows:

1. Move bed to opposite wall. get nice backrest pillows so that the bed can be a place to watch tv. Beds are my preferred place for tv-watching and the chief engineer won't let tvs enter our bedroom.
2. Put skis in closet
3. Get rid of desk in closet
4. Replace desk in closet with counter-height butcher block table to create a standing desk
5. Remove excess clutter
6. Paint walls
7. Put our three matrix posters up
8. Celebrate by watching the Matrix!
Posted by Unknown at 8:33 PM 2 comments: