This is what minimalism prepared me for

Remember the good 'ol days when you first discovered minimalism and its lofty promises? It taught us that if we could get rid of our attachments to physical objects, we could:

Ditch all of your things and roam the globe freely without a care in the world!

Free ourselves from consumerism and you can quit your job and write a blog!

Let us get rid of our mortgage, so we're no longer trapped in a huge house we can't afford that's 2 hours away from our boring-as-sin job!

When I first learned about minimalism, none of these three ideas was my motivating factor. They seemed a bit lofty for me. I just wanted a cleaner house. But in the process I did become far less attached to stuff. But this month I finally learned that minimalism really is freedom. Why? Because...

I moved out of my parents' house! Completely!

Last time I talked about my childhood bedroom, my mother had pretty much told me that I was not allowed to clean it out. More or less, this meant that she'd claimed everything in that room for her.

Tension has obviously been building with my mother and my sister. My mother and my sister live lives of delusions when it comes to clutter. They both think the level of clutter is fine. Wait, let me rephrase that...they think that the size of the hoard is acceptable. I'm sure it will be fine until my mother falls and breaks her hip in the hoard.

But my mother generally lives a life full of delusions that she has to keep her psyche from falling completely apart as a result of my father's emotionally abusive behavior. The end result of his behavior is that she has practically no self-esteem and little self-worth. My mother wanted to get into medical school when she was younger. She didn't get in on the first try, and instead of trying again, she changed fields. But she's phenomenally jealous of doctors. She thinks that they have lots of money and fantastic lives (sorry mom, money can't buy happiness, and doctors have lots of money because when you work 80 and 90 hour weeks like my doctor friends do, you don't have time to spend money!) She's got a God complex about doctors.

So anyways, at the holiday dinner table my mother started going off about the amount of alcohol a woman can drink during pregnancy (no, I'm not pregnant. Yet). I haven't done any literature searches lately, but my MIL is a licensed OB-GYN and she told me what limits she gives her patients. I rattled that information off, and my mother immediately decided that my OB-GYN mother in law was wrong, and that she was right. She was playing doctor because she couldn't get to be one.

I lost it. In front of the entire family, I told my mother off. "You don't have an MD, my MIL does, so  no, mom, you're wrong. Stop pretending to be a doctor, because you're not. You may have studied some of this is school, but you aren't the one practicing medicine. So shut up."

I didn't cross a line, I dropped a nuke on it! I lost control. My uncle once asked me about how abusive my father had been. He said that he himself had been temped to hit my cousin, and had done it once, just once -- but it was because he, my uncle, lost control, not because it was my cousin's fault.

I realized that I had lost control and it was my fault. It was therefore my job to keep from losing control again. I knew it was time to leave. Not just for the weekend. But for good.

There was still plenty of stuff that belonged to me in my childhood bedroom, but I suddenly realized that I wasn't going to be able to retrieve it all, because I was never coming back to that room again. Maybe I'll return to the house some day, but I'll never return to that room. That house is too full of delusions. I need to be around people who are grounded in reality in order for me to recover from my own problems.

I got up from the holiday table and asked my husband for two things: Four boxes, and twenty minutes. And with a mantra of "it's just stuff, it's just stuff, it's just stuff..." running through my head, I packed the most important things to me, and said goodbye to the rest. I suddenly understood why minimalism leads to freedom. I finally had psychologically detached from my stuff enough to let a childhood worth of emotion-laden objects go, so that I could go where I wanted.

In the end I took my piano lamp, a handbag, three pieces of expensive china from overseas trips, my favorite tiffany-style lamp, some of Gram's clothes, a couple mementos from my Spain trip, six framed photos, and my stuffed animals. My CD player was missing from the photo, but I took that too.

Here's what I left. 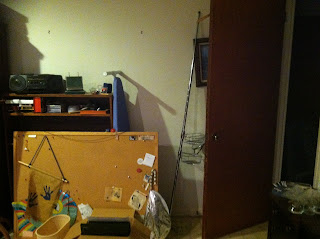 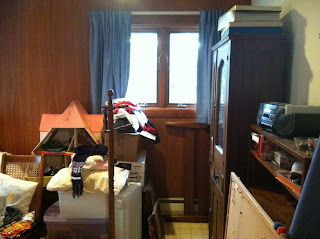 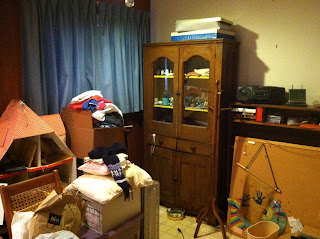 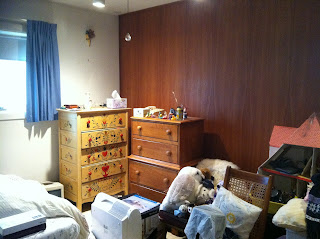 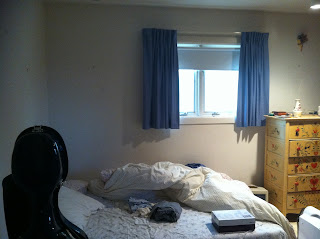 My husband was mortified about the things I said in front of my family. I should've been, but wasn't. I finally got to tell my mother that it was time she stopped blaming something that happened 40 years ago her for problems today, because she often does the "woe was me, doctors have all the money and all the attention and everyone loves them and I'm miserable because I'm not a doctor." Well, mom, you chose not to try the MCATs a second time. I have a friend who took the MCAT 17 times before she finally got into medical school. You chose not to go back and to do a post-bac pre-med program after college.  In other words, YOU CHOSE NOT TO BE A DOCTOR! This choice was no one's fault but your own! Live with the consequences and choose to be happy in another field! You wouldn't need a $200,000 income if you'd get help for your hoarding and stop spending money on crap!

Case in point: When I was in college she blamed the condition of the hoard on me because I had a nasty habit of bringing the contents of my hoarded 10x10 dorm room home every summer and dumping it in the dining room (which wasn't used as a dining room anyways. It was my mother's dumping ground for half a dozen musical instruments that never got played anymore.) Who did I learn the hoarding habits from? Her! My father! My sister!

But even with me gone, and me having found a way to substantially reduce the clutter in my own home, she still finds ways to blame the condition of the house on me. When I ask about donating all of the outdated books in the basement to a library, she says, "oh, but your books are still down there." No they're not. The books I got rid of and threw out that she and Dad "rescued" and are now down in the basement hoard.

More aggrivating still, my mother continues to blame me for my father's violent episodes during my childhood by saying, "well, you could've tried not to egg him on." Violence is a choice a man makes.

One morning I was reading the Children of Hoarders listserv and saw a banner someone had put at the end of their message. It said simply:
"None of this is, has ever, or will ever be your fault."

But my parents and sister will always believe that our family situation is my fault. I can't change them. (Funny, though. I left the house years ago and yet it's gotten worse. And yet somehow it's my fault. Hm.)

So I have left. Permanently. There is still plenty of stuff that belonged (past tense!) to me in my childhood bedroom, but I suddenly realized that I wasn't going to be able to retrieve it all because I was never coming back to that room again. Maybe I'll return to the house some day, but I'll never return to that room. I told my mother that everything I care about of mine is gone. My stuff is gone and she can do with the rest as she wishes.

Like she'll believe it. I'll still get blamed. And you know what?

I don't care. And it feels AWESOME.

And now I'm off to go put together the last carload of items to take to the thrift store before our 2012 tax deduction is up. Have a happy un-hoarded new year, everyone!
Posted by Unknown at 10:21 AM

Email ThisBlogThis!Share to TwitterShare to FacebookShare to Pinterest
Labels: coping with hoarders

If you try to advertise your online business by writing a comment on this blog, please don't bother because I will delete it.